WHAT I DID ON MY SUMMER VACATION: LOS ANGELES 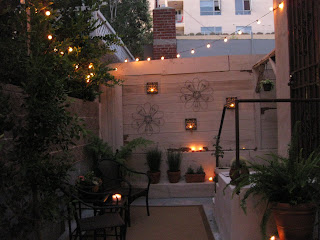 We are home, and we are exhausted, poor, and a little sad. Our beautiful daughter is wildly successful, the owner of a fantastic apartment, and in a relationship with a gem of a man. She cooks! She cleans! She hosts great parties! And now, thanks to us, she has a beautiful patio!

A little backstory. Our trip to California involved a wedding in San Francisco. It involved the perfect setting, the best of friends, the most beautiful bride, and the best partying we have done in years. After that, we traveled to Los Angeles to spend what my husband thought was a week of vacation visiting our older daughter.

A talent agent, this girl is a go-getter of mythic proportions. She reps some very recognizable faces, and she makes multi-tasking look like child’s play. Riding in the car with Marion is an exercise in self control, as I had to bite cheeks to keep from shrieking “Navigating this nightmare traffic and texting while carrying on a conversation with your parents is DANGEROUS!” She arranged for us to visit the set of “CSI New York,” which was so AMAZING. Eat your hearts out, America—I was actually in the morgue and GOT TO PULL OUT A SLAB! I met AJ Buckley, who is a cast member (very handsome)!

Charlie, ever optimistic, purchased three Los Angeles tour books before we left. As Marion had to work during the week that we were there, Charlie had visions of doing the Griffith Park Observatory, the Getty, and perhaps even the Tar Pits. I knew better than to burst his bubble before we departed; I didn’t want to plunge him into gloom.

The reality of the LA sojourn consisted of more prosaic pastimes. Marion has a new apartment. It has a large, private patio out back. The patio is empty. Her parents have an American Express card. Her mother is an HGTV maven. Put that all together, and it spells WORK, WORK, AND A LOT OF SWEATING.

Los Angeles has all the stores needed to furnish even the most lavish of lanais. But an unfortunate truth about that city is the fact that it is like one unending strip mall. To do the proper comparison shopping for patio gear and plantings requires putting around two hundred miles on the odometer and spending at least seven hours just LOOKING AT STUFF BEFORE COMMITTING TO BUY. This part of the project took one full day.

The following day, after an exciting visit to the CSI set, where Charlie actively campaigned to become an extra (unsuccessfully, and much to his daughter’s aggravation), we put another couple of hundred miles on the car. But this time, we bought FURNITURE. Tip: Smith and Hawken may be going out of business, but 50% off there still amounts to HUNDREDS of dollars for a chair! Home Depot, on the other hand, sells patio tables and chair SETS for that same amount! (Home Depot is three hundred miles away from Smith and Hawken, incidentally.) Loading the car with table, chairs, other tables, and other chairs was a challenge, but Charlie crammed all that merchandise in!

That night, instead of sitting at a chic bistro eating mussels and drinking wine, we hunkered over instructions translated into English by Chinese folk (“add bolt to table leg elegantly”). By eleven that night, we had the tables and chairs assembled and looking great! The pizza we had delivered was good, too!

The next day was also successful. Plants. Back to Home Depot. We bought palm trees, ficus trees, ferns, and incidentals. If it weren’t for a curmudgeonly but delightful gay man (you know who you are, Stan), we wouldn’t have been able to do it. But Stan told us exactly what to buy, what pots to put each plant in, the soil, the fertilizer, the hose, and everything. The only thing he didn’t do was pay.

In Los Angeles, every home store has legions of hopeful Mexican men congregating outside, looking for work of any kind. Stan arranged for one of them, a gracious man named Raul, to load up and deliver our haul. Despite nearly losing Raul on the highway twice, we all made it back to the apartment, where Raul nearly took the top off his truck in an attempt to enter the parking structure.

Marion then directed the potting process, causing near exhaustion and dehydration in all of us. That girl is a slavedriver! The apple doesn’t fall far from the tree. That is a metaphor—an apple tree is about the only item we left behind at the Home Depot. While we potted the plants and Marion prohibited anyone from taking even a five second rest, Charlie carted away the trash we generated and was caught gazing longingly at the AAA guidebook that he left on the kitchen counter in the apartment.

The result was fantastic! The three of us and Marion’s friend Bryan did not require any direct medical attention, the patio is worthy of Architectural Digest, we were able to have Marion’s friends over on Sunday night for a cookout, and our muscles did not get really sore for another two days. Success!

We are now home. Charlie has donated the tour books to the library, and we will be sending in payments to the credit card company for months. But as any of you who are parents out there know, no investment gives better returns than an investment in one’s children.

I mused about this one all the way home on the plane. Life is a series of connections, and the most important ones, between parents and children, can all too often fracture. Our other most important connection to our spouses, invariably ends with one partner living on without the other. I vowed last night to hold on to my lifelines with all my strength. But I also made a promise to myself to become as independent as possible, while continuously looking outward for new experiences and people.

YOU ONLY GO AROUND ONCE. MY AIM IS TO GO AROUND WITHOUT GETTING DIZZY.