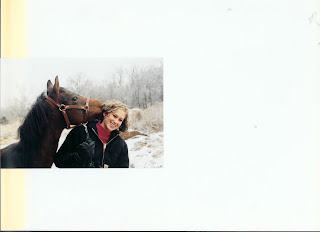 I just returned from accompanying Annie to Chicago for a championship Dressage event. For those of you who don’t know, Dressage is that kind of riding that they do on those Lipizzaner stallions. The horses look like they are dancing, and the riders look like they are doing nothing but sitting there. The truth is the exact opposite.

Annie went on a pony ride at age six. Actually, at this community picnic, the pony rides were free, and so Annie would take a ride, run around to the end of the line, and do it again. And again, and again. After about fifteen rides with Annie and another ten with the other children, the pony became exhausted and had to be retired for the day. Annie, on the other hand, was outraged that the pony had to leave before Annie could have another dozen rides. That was the beginning of a horse career that has lasted for twenty years.

Horses and women go together. Men at horse events are as scarce as hen’s teeth. I guess all the men who like horses go west and become cowboys. Do you know what having a horse and showing it entails? I am going to tell you, and then you, like me, will wonder why MEN don’t do this:

Horses are huge. They can be very dangerous. They have to be wrangled around, bossed, broken, and trained to do exactly what the rider wants them to do. They don’t always want to cooperate, and so they can BUCK, SPOOK, GALLOP AWAY AT BREAKNECK SPEED, THROW PEOPLE UP IN THE AIR, RUN PEOPLE DOWN, AND EVEN KILL FOLKS. And who is it that wants to interact with these thousand-pound animals? LITTLE GIRLS.

Annie was six when she started her love affair with horses. By the time she was twelve, she had her own horse, and we watched, often in horror, as she took control of a beast who could easily kill her, and loved every minute of it. For her, the ultimate experience is the HORSE SHOW.

A horse show gives people from all over the opportunity to compete at various levels of expertise, and then win ribbons. Beautiful women (not men, remember) on beautiful horses executing elegant movements are awe inspiring. It is a thrill to watch. But here is the BACKSTORY:

It takes years of repetitive practice to become show-ready. You and the horse have to work as a team. I have been watching Annie ride for years. She loves every minute. I don’t get it. Here is what it looks like to me:

To practice, you have to tack up your horse, ride him for an hour, untack, rinse him (or whatever they call that), get the yucky stuff out of his feet, clean your saddle and other leather equipment, give the horse some food, and then go home. This is after you have worked a full-time job in order to AFFORD the horse, the saddle, the food, the stall, etc. To be effective as a rider, you have to practice just about every day.

If you are really dedicated and good at all of this activity, then you get to go to a HORSE SHOW. At the show, I would estimate that for every five minutes spent competing, there are about seven hours of work leading up to the event. There are equipment stalls and feeding regimens. There is also training, hauling manure, cleaning tack, washing the horse, braiding his mane, and shining him up like a new penny. After showing for five minutes, the horse has to be rewashed, unbraided, and fed. After that, there is all of the cleaning of the saddle, the bridle, the boots, etc. Did I mention that dressage riders always wear WHITE PANTS?

We just got back from a show in Chicago where the wind blew, it rained cats and dogs, you could see your breath, and the arenas looked like swamps. I wanted to go home the minute we got there. But Annie and all of the other horsewomen there LOVED IT. I still don’t get it. Don’t BOYS like playing in the mud? Isn’t it guys that love to stomp in puddles? I thought large farm animals were the métier of the masculine gender!

As I sat there in the rain, watching, I did an informal count. There were approximately two hundred people competing in the show, and four of them were men. The people wrangling, pushing, finessing and mastering these magnificent animals were women. Women!

And according to Annie, a lot of her girlfriends ride in RODEOS. So here is my question: Isn’t the term COWBOY inaccurate and just perhaps a little too self congratulatory?